Caves, valleys, rocks and even stonehenge: mystical places of Crimea 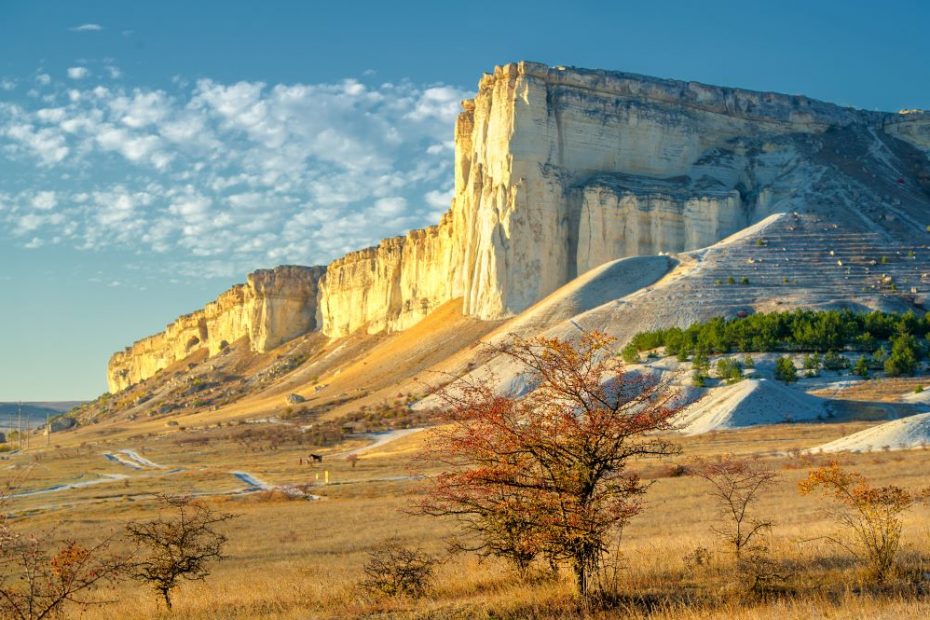 The warmer months are close, and the peninsula is gradually preparing its beaches for the seasonal landing in swimsuits. However, Crimea is not only a traditional rest on the sand by the sea. We have compiled a selection for those who are looking for a little more than an opportunity to soak up the shore.

Crimea is a crossroads of civilizations. Historical, ethnic and cultural heritage literally enveloped the region with mystery and mystical legends. At different times, Greeks, Scythians, Romans, Slavs and Sarmatians lived here. Their myths and beliefs intertwined together, turned over time into tourist horror stories and made many local attractions a magnet for ufologists, shamans, healers and other esotericists.

The flight from Moscow to Simferopol with Aeroflot will take a little more two hours.

Search for tickets to Simferopol

For 2,700 rubles * per day, you can book a car right at the airport, which will make it even more convenient to explore the peninsula. In the holiday season, prices are higher, and there are much more tourists who want to visit the sights. Therefore, spring is the best time to visit the “non-beach” Crimea.

Where to go to tickle your nerves

This is the longest cave in the former USSR. The total length of its halls is 21 kilometers. In addition, this is the only cave in Crimea with an underground river. This river forms one of the most famous waterfalls of the peninsula nearby – the 25-meter Su-Uchkhan.

The high content of iron oxide in the rock of the cave gives it a bright reddish tint and explains the origin of the name: “Kizil-Koba” in translation from Turkic means “Red Cave”. Locals still argue: some claim that a firebird lives deep in the bowels and underground grottoes, which sometimes appears to tourists in the form of a glowing ball over the river. Others say that the cave was once home to the Martians, who chose it for the red vaults that resemble their home planet in color.

Sarmatians lived in the vicinity of the rock for a long time. They attached great religious significance to Ak-Kai and, judging by the findings of archaeologists, they liked to hide gold in secret grottoes and rocky depressions. Later, people finished writing that the treasures of the ancient settlers were conspired with terrible curses, and they were guarded by a werewolf snake. It is unlikely that the snake is still on watch, because horses from a nearby farm take tourists around the neighborhood without fear.

Locals say that pets and wild animals avoid visiting the cape, and if they get there, they behave unnaturally and anxiously. difference from esoteric-minded citizens: every meter of the peninsula is filled with them during the season. The fact is that a strong magnetic anomaly is observed in the area of ​​the cape. Its nature, according to rumors, has been studied for a long time at one of the nearby military bases. Ufologists believe that the cape is a regional UFO landing site. This is partly confirmed by the rings of force that dot the surface of the earth – stripes about 50 cm wide and several tens of meters in diameter form a vicious circle. Other mystics believe that Meganom is the point of concentration of power, and there you can slip into the past or the future: after all, the ancestors would not have put a tantric altar anywhere!

At the foot of the cape, under water, there is an anchor graveyard – a favorite place for divers. They argue that Meganom’s underwater world is much more picturesque than the terrestrial one.

Strictly speaking, it doesn’t look like a valley, but rather like a gorge or a natural boundary. The main attraction is the stone pillars, in which the inquisitive eye can easily see the outlines of people, animals and objects. In the dense fog that often envelops the valley, these stone sculptures really seem to be ghosts, although the phenomenon is quite explainable by the laws of physics: warm air, rising to the top, cools and slides down. Hence one of the ancient names of this area – the smoking mountain.

The valley has very interesting vegetation: moss, vines that have run wild since antiquity, bushes covered with yellow lichen. All this together creates a mysterious atmosphere: you can spend hours wandering around the valley and wondering who the next moss-covered pillar looks like. This is probably the origin of the legend that time on the mountain flows slower than it should be: it seems that you are among the stones for only 15 minutes, but in fact two hours have passed.

Black Mountain Kara-Dag ( 44.93321541250946, 35.23151281985056 ) – the remains of an ancient volcano towering over the resort Koktebel. At the top is the Karadag nature reserve, at the foot of the famous arched rock “Golden Gate”, and in the mountain itself from the sea side you can see the Roaring Grotto. According to legend, more than a dozen ships sank here, dragged by an unknown force into the mysterious darkness of the grotto.

Esotericists argue that the sleeping volcano continues to spew out streams of energy, which have long come to be saturated with famous writers, artists and other creative people from all over Europe. One of the slopes of the mountain, Magnetic, is a zone of, as you might guess, a magnetic anomaly. Some believe that Kara-Dag hides in its depths the gate to the underworld, referring to Homer, who, no doubt, visited these places and pointed to Cimmeria as the entrance to the kingdom of Hades.

Crimean Stonehenge, the ancient Temple of the Sun ( 44.43039786971312, 33.738654491591525 ) is a stone ensemble in the southernmost point of Crimea, on Mount Ilyas-Kaya, not far from Sevastopol. The stones form a semblance of a flower with petals and are positioned so that the first ray of the sun hits exactly the core of the flower.

According to legend, this place gives the fulfillment of desires to those who can get to the stone pillars. It will not be difficult even for a child. And if suddenly you do not have a cherished dream, you can just come to the mountain in the afternoon and admire the sunset over the sea.

* Prices are valid at the time of publication