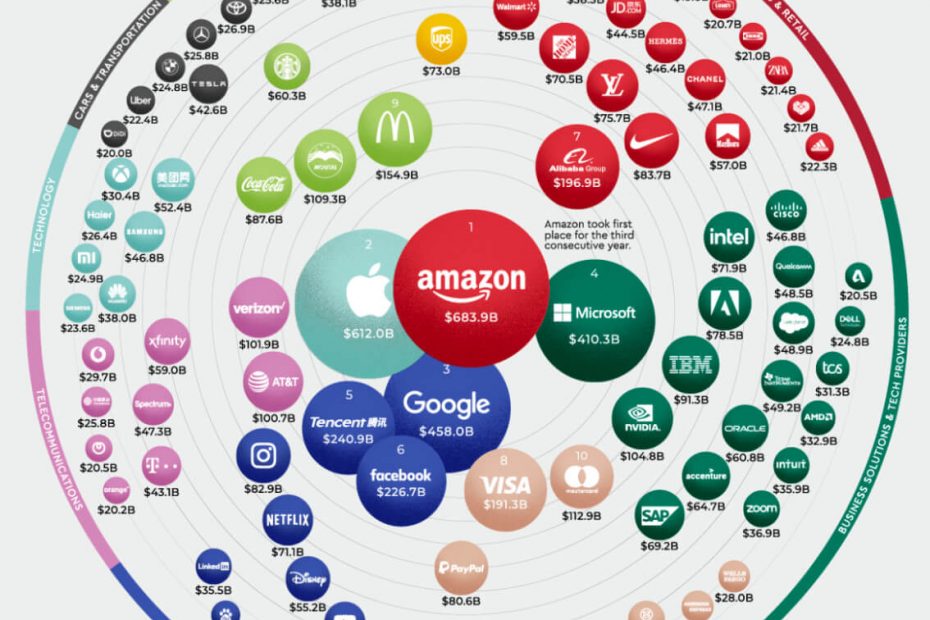 Who makes the list of the best companies in the world

According to the BBC, in 2020 the global economy suffered one of the worst crises since the Great Depression: stock markets fell, bankruptcies grew and the number of employees in search of new job. But there were also businesses that, despite the general decline, were able not only to maintain their positions, but also to increase their turnover.

We have analyzed the data from the annual brand value rating of global companies, compiled by Kantar BrandZ, and we will tell you about the top leading businesses on the planet.

Every year, the Kantar BrandZ research group compiles an international rating, assessing the financial contribution that the brand brings to the parent company, or its value.

The results of this analysis are later combined with the results of a survey of about 170 thousand consumers from different countries.

Significant growth in brand value over the year is a feature of the ranking in 2021. On average, companies from the top 100 have grown by 42% compared to 2020, which is 4.5 times higher than the average growth rate over the past 15 years.

The total value of the top 100 brands is over $ 7 trillion – more than the GDP of France and Germany combined.

The list is dominated by large tech companies. Experts suggest that this is due to restrictions during the pandemic: consumers have “gone” to the Internet for both shopping and entertainment. For example, Facebook climbed 2 spots in a year, while Instagram and TikTok made it to the top 10. The same Instagram as a brand doubled its capitalization during this period.

Tesla has become the fastest growing company – its value has grown by 275% in a year to $ 43 billion. In addition, it has become the most expensive car brand on the list.

Amazon has been holding the first place for three years – over the year the brand value has increased by more than half and reached $ 683 billion.

Apple is on the second line of the rating with $ 612 billion. The company was hit hard at the beginning of the pandemic, when in a couple of days its shares fell by almost 19%, but by the 4th quarter it was able to recover and even overtake its best performance.

Top-3 is closed by Google, whose value has almost halved over the year. In fourth place is Microsoft, which showed less impressive growth (+ 26%). The brand’s capitalization is now $ 410 billion.

A significant leap during the lockdown was made by the media and companies that “live” on the Internet: Tencent media grew by 60% and was ranked 5th, Facebook’s positions strengthened by 54% (6th place), and online shopping in Alibaba increased brand value by a third (7th place).

In contrast to this, the leaders of the financial sector grew little – and for the most part they stayed in the top ten due to old merits: Visa, with an increase of 2%, was on the 8th line, and Mastercard, with 4%, closed the top 10.

The only HoReCa representative in the list is McDonald’s (9th place, up 20%). 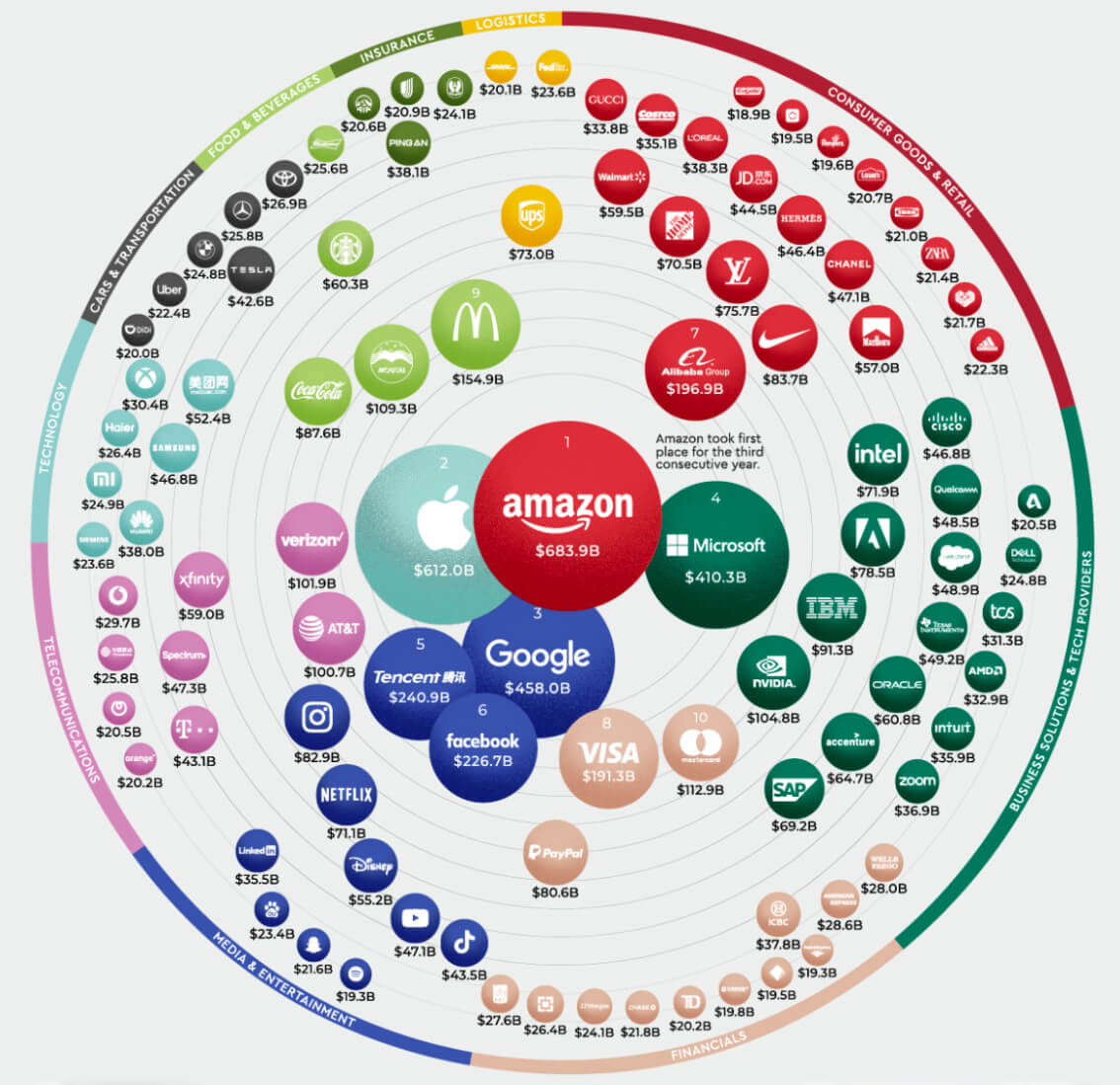 How to increase brand value

According to analysts, 70% of a company’s success is focused on adherence to several principles: a positive customer experience, a functional product, and a good promo.

A smart strategy can make a difference, and even small brands are capable of blowing up the market with the right message. Businesses that have created a clear emotional association (like Apple) and prestige grow faster.

Global giants such as Nike and Coca-Cola have also mastered the art of emotional advertising. For example, in May 2020 Nike released a video urging people to stand up for equality: For once, Don’t Do It. And the Coca-Cola New Year van is closely associated with family values ​​and a holiday with the family.

According to Kantar, brands with a strong social position have grown the most over the past 12 years – by 175%. Such companies are preferred by 61% of buzzers and millennials, 53% of middle-aged people and 47% of older consumers.

Analysts provide 3 recommendations for businesses looking to make a brand more “focused” and bring their position to the public field:

A “strong” parent brand gives you an edge. Such companies are likely to grow easier and faster than weaker ones, which is why Amazon and Apple can hold their place at the top for several years in a row.

According to the results of many years of research, it is the brands of popular corporations such as Tesla that take off faster and more voluminously. And it’s harder for new and little-known ones to break into the top 100 without strong support.

It’s not enough just to develop a marketing strategy. For investments in promo to pay off and pump brand value, you need to “perpetuate” the company’s message in advertising and routine work.

For example, innovation is a core value of the Tesla brand. Thus, the manufacturer of electric vehicles in 2020 spent $ 1.5 billion on research and development, which helps to stay ahead of competitors in terms of technical parameters.

A quality product has long ceased to be a USP for customers. Strong brands “take” their customers by anticipating their expectations and always giving more: they help to express themselves, give a sense of belonging to culture and values ​​through their product. Ability to speak the same language with the audience – additional points to customer loyalty.

Another important factor is the experience of interacting with the product, from the first touch to direct use. According to the Loyalty Barometer Report, in 2012, 81% of consumers want a deeper relationship with a brand – it doesn’t have to end at the moment of purchase.

For every second customer, the shopping process itself is important, its convenience, accessibility and clarity. 41% of customers say that even a simple “thank you” from the brand has a positive effect on the impression of the company.